What’s in it for you?

When the Chinese government first announced the Pilot FTZ in Shanghai, there was much excitement as many were keen to find out what kind of benefits the new rules would bring to their industries. The initial euphoria passed quickly, leaving most regular businesses disillusioned. From what has been published so far, it seems that only certain specialized industries have reason to actually get excited.

Foreign companies in the zone, for example, are now allowed to manufacture and sell gaming consoles (Microsoft was one of the very first companies to set-up a subsidiary there for this purpose), set-up wholly foreign owned shipping management companies or medical insurance companies. Politically ‘sensitive’ websites are no longer banned, making websites such as Facebook, Twitter, and The New York Times accessible from within the Zone. Additionally, with the expected liberalization of the RMB in the zone it is an interesting option for banks and other financial institutions.

But what are the potential benefits for the many industrial companies that make up the largest share of foreign investment in China? China Focus has collected and evaluated several scenarios on how to make use of the Shanghai PFTZ.

Scenario A:  Service centre for international technology companies
Setting up an after-sales centre to cut red tape at the border

Many foreign technology companies are experiencing continued growth in their business with China and Asia. Very often however local presence is limited to a sales organization with constrained after-sales service capabilities. After being active in the region for many years, the installed base of machines is likely to reach a threshold which makes it profitable to offer extended after-sales services. The new PFTZ presents the opportunity to build up a warehouse for critical spare parts outside of the Chinese customs territory. This is interesting because it saves tariffs and import taxes for parts that are later used in other Asian countries. For spare parts to be used in China, this is also advantageous because it avoids any strain on the Chinese company’s liquidity that otherwise would result from import VAT prepayments on the spare parts. This is especially true for higher value parts.

Previously, companies might have looked at Hong Kong or Singapore for the establishment of such a centralized spare-parts warehouse. In the Shanghai PFTZ the rules for customs clearance will be vastly improved with the adoption of an electronic supervision system, a single window for dealing with customs and CIQ issues and other measures to cut red tape at the borders. Once these new rules and procedures are fully implemented, the Shanghai PFTZ will be a competitive alternative for companies that are looking for a location for their Asia after-sales service hub. 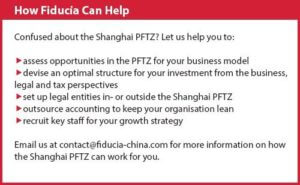 Scenario B: Regional Headquarters
Setting up a management and holding company to control subsidiaries in China and Asia

With new regulations in the PFTZ, Shanghai tries to add further pull to its efforts to attract Regional Headquarters (RHQ) of MNCs that will manage several legal entities in and outside China. They are highly attractive for China because it means the MNC will relocate many overhead functions to the country which will result in the creation of high level jobs, the growth of an international workforce and the spurring of investment and development. Capital requirements for establishing a company within the Zone have been substantially relaxed, making it a more competitive location.

So far however, Shanghai lacks attractiveness as a location for RHQs that manage subsidiaries all across Asia when compared to alternative locations such as Hong Kong or Singapore.  Especially in terms of financing options, liquidity pooling and foreign exchange risk management, as well as the strict regulation and non-convertibility of the RMB kept MNCs from choosing Shanghai over the others in the past. According to the plans for the PFTZ, these disadvantages might be leveled out soon. The draft rules of the zone also foresee easing the administrative requirements for overseas investment, which make it interesting for MNCs and big domestic companies as well.

For Western companies that are looking for a location to set up a distribution centre in Asia, the Shanghai PFTZ offers some distinct advantages, too. It is particularly attractive for companies that need an advanced logistics infrastructure due to a high number of daily shipments, complex consolidation of incoming shipments or with higher value goods. Especially the simplified and faster customs clearance procedures are beneficial, since duties only apply to those goods that are eventually shipped to customers in China.

Additionally, the Shanghai PFTZ offers the opportunity to set up a showroom to showcase the capabilities of machinery, for example. Such a showroom can be used as a year-round location to attend to customers and also as a base to temporarily store machinery to be exhibited at various different industry trade shows in the region. By being located outside of the Chinese customs territory, all this is possible without having to go through time-consuming and costly import and export procedures every time, while simultaneously also avoiding duty and VAT payments. 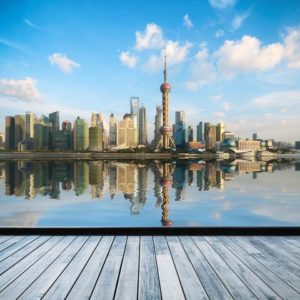 Only time will tell how these challenges will be overcome and policies will be executed. Fiducia will keep you updated on any changes in the Shanghai PFTZ throughout the year. 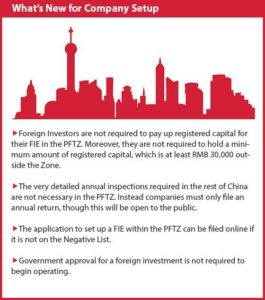