This year marks the 40th anniversary since Deng Xiaoping’s “Open Door Policy” kick-started China’s opening up to the world. President Xi Jinping has promised that the country’s doors will continue to open “wider and wider” to foreign trade and investment. But against the backdrop of rising trade tensions on the global stage, and grand industrial ambitions at home, will China keep its word?

Many of our clients are optimistic. They welcome recent tax reductions and the lifting of foreign-ownership caps in the automotive and financial sectors. They appreciate China’s anti-pollution drive – despite its short-term costliness – for its effective and fair enforcement across foreign-invested and domestic entities. And they see fields of opportunity in the country’s wealthy and experimental consumer market.

But new roadblocks have also emerged. In sectors where China is pursuing dominance, such as high-tech manufacturing and materials, some feel that government funding, unfair licensing processes, and “buy local” policies are skewing competition in favour of domestic players.

Across industries, international firms are also burdened by China’s ever more impenetrable “Great Firewall”. And when it comes to the US-China trade dispute, it’s either already causing cost hikes or threatening to seriously disrupt supply chains if it keeps escalating – a scenario which, unfortunately, looks increasingly likely.

We have put together a table highlighting some of the reforms and barriers that have impacted our clients the most over the past year: 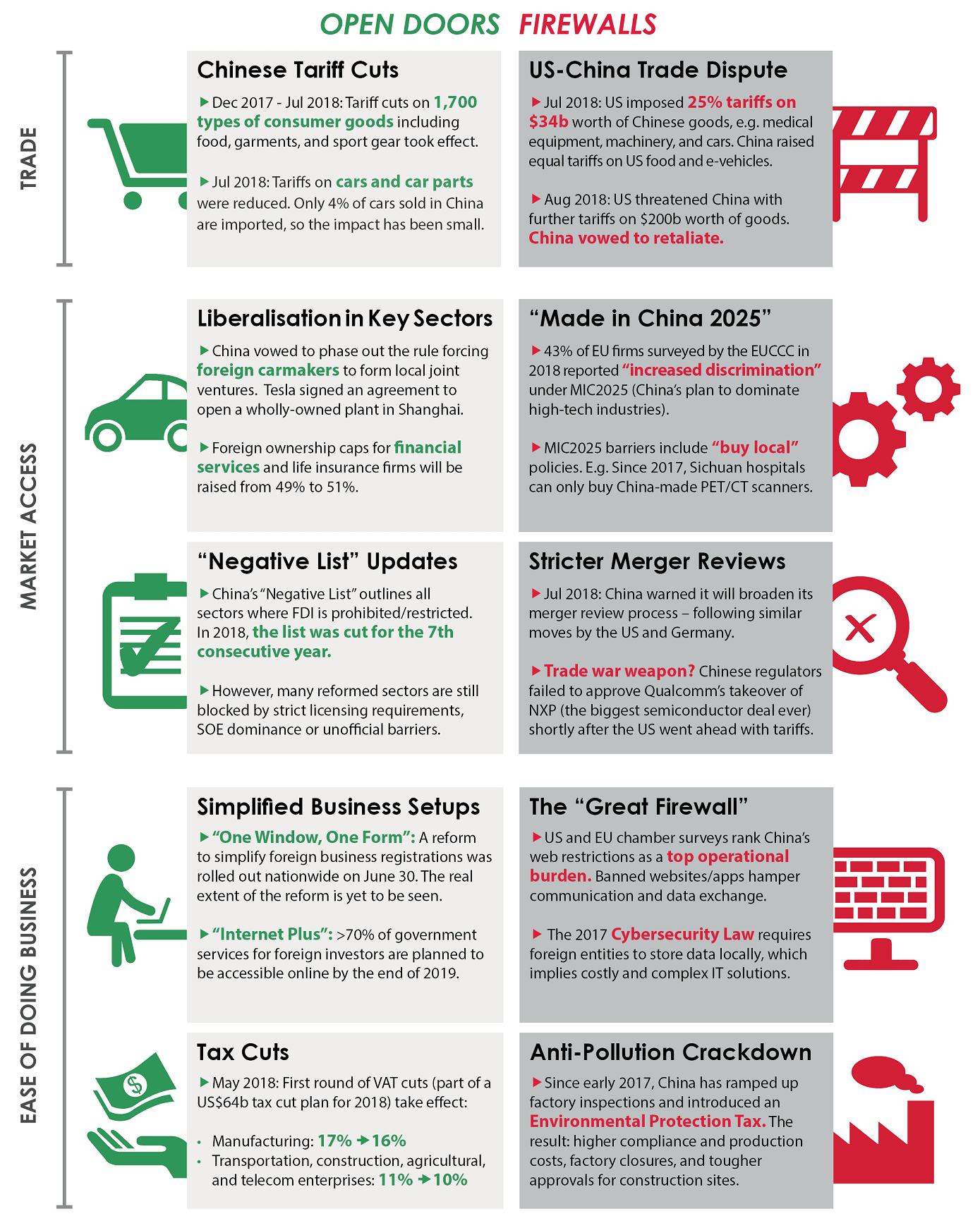 So which way is China’s door swinging? For executives who are drawing business plans and making investment decisions, it might seem necessary to side either with the optimists or pessimists. But our recommendation is not to. The future of China’s business environment is too complex and industry-specific to make simplistic projections. Some doors will close but others will open. Accepting this is the starting point to ensuring that your business is ready to avert risks as well as seize opportunities.

For four decades, the China’s gradual reforms and export-led growth model benefited the Chinese economy and foreign companies simultaneously. Now that China has established itself as an economic power, it is pursuing a second wave of tech-driven development with more global ambitions. This time around, it’s harder to say whether the results will be “win-win”.

In a climate of geopolitical uncertainty, it’s more important than ever to have open, informed discussions about China’s business environment. This issue of China Focus is our attempt to spark a nuanced conversation. We invite you to join our upcoming events, where we will keep exploring the open doors and firewalls that matter for your China business.