The escalating trade war has sparked fears of a slowdown in Chinese consumer spending. Retail sales have, indeed, grown at a slower pace this year.

But “Singles Day” – the annual online shopping frenzy that has become a barometer of Chinese consumerism – broke records. Sales growth slowed down but was still double-digit. 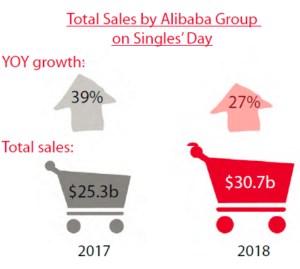 More importantly, China stayed on track in its transformation into a consumption-driven economy. Consumption has accounted for a larger chunk of GDP growth this year. 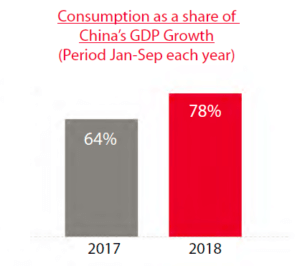 Car sales in the world’s biggest automotive market were hit by several factors in 2018:

If the trend seen in the January-October period continues, annual car sales could contract for the first time since the 1990’s. 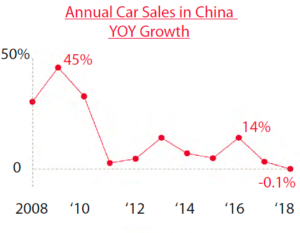 But not all automotive segments are moving at the same speed. The new energy vehicles (NEVs) segment keeps accelerating. 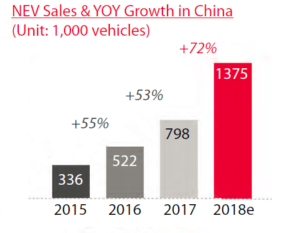 In 2017, automation at Chinese smartphone and automotive factories accelerated, boosting demand for industrial robots. In 2018, that momentum was lost. Many manufacturers paused their investments in automation because of trade war uncertainties. Some are waiting to see if tariffs reach a point where shifting their production away from China would make sense.

As a result, sales of industrial robots in China, the world’s biggest robot market slowed down sharply this year. 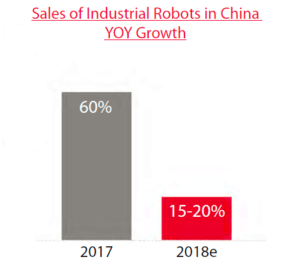 However, foreign robot makers – especially European and Japanese suppliers – still dominate the market. In 2017 they accounted for 75% of robot sales in China, including those produced locally, and their market share has not shifted significantly this year.