China’s 1.3 billion consumers have fueled the growth of B2C brands worldwide for decades. Across categories, they now account for a large chunk of multinationals’ global revenues: 41% for Volkswagen, 33% for cinema group Imax, and 20% for Apple and Adidas.

But simply taking your brand to China is no guarantee for growth. The retail landscape has become so saturated, mature, and complex, that it’s more vital than ever for market entrants to go beyond a superficial understanding of the local market. Here are five features of Chinese consumers that foreign brands should be aware of:

In 2018, rural consumer spending per capita grew at almost twice the speed of urban spending. The recent rise to fame of e-commerce platform Pinduoduo – which offers good bargains to a mostly rural user base – has revealed just how demographically dispersed China’s spending power is. This is even true in the high-end segment: more than half of China’s luxury consumers now live outside of the country’s 15 top cities.

Reaching China’s lower-tier cities has gotten easier thanks to e-commerce. Most foreign players, however, continue to concentrate their offline presence in the main metropoles. This makes sense when first entering the market, especially for high-end players whose glitzy flagship stores in prime locations help cement them as aspirational brands.

China’s “open door policy”, launched in 1978, gave way to decades of unprecedented economic prosperity. Almost overnight, new products, trends, and aspirations started flourishing. Digital connectivity has only sped up this process. As a result, consumers got used to a brisk pace of change. They expect novelty and tend to be much more experimental than their Western counterparts.

What does this mean for foreign brands? One implication is the need for a broad and frequently updated product assortment. This approach underlies the success of Decathlon in China, its largest market outside of France. The French sports retailer offers all the gear consumers need to try out new sports, releasing more than 3,000 new products per year across 80 sports categories. For experimental shoppers, affordability is also key. Although there is a growing niche of committed Chinese skiers seeking top-notch gear, many more are just looking for “good-enough” outfits for a one-off ski adventure.

Chinese consumers are not just keen on trying out new hobbies and products; they’re also experimental when it comes to shopping habits. This early-adopter mindset is partly what’s fueling “new retail”, a concept coined by Alibaba to describe the seamless merging of offline, online, data, and logistics along the customer journey – largely achieved through tech.

To stay relevant in a market where the shopping experience is in constant flux, foreign brands need to rethink their traditional retail formats to fit China’s tech-thirsty consumers. MAC Cosmetics’ augmented reality (AR) mirrors, where shoppers can virtually try on lipsticks in-store without having to worry about hygiene, and the “smart shelves” at INTERSPORT’s Beijing megastore, which display information about a certain shoe as soon as a customer grabs it, are some examples of how global brands are adopting “new retail” strategies.

An A.T. Kearney study found that 68% of Chinese social media users are receptive to brand recommendations by online celebrities, compared to just 34% in Germany. KOLs are so popular, that over half of China’s college-age students chose “online celebrity” as their dream job in a recent survey by Tencent.

Many global brands are using KOL marketing effectively. When BMW’s Mini Cooper partnered with Becky Li, a fashion and lifestyle influencer, she sold 100 limited edition cars in under five minutes through her WeChat account. But the KOL industry has boomed to the extent of sparking fears of a “bubble”. Risks include fake follower profiles and campaigns that backfire because they’re perceived as “phoney”. Even if others are engaging with KOLs, brands must be cautious when doing the same.

Home-grown brands are gaining ground in China’s retail space, and foreign players can no longer blame this on cheaper prices. Huawei has eaten into Apple’s smartphone market share by positioning itself as more fairly priced and more innovative. Its devices offer unique features that are a first in the market – take reverse charging, whereby your handset can be used to wirelessly charge other devices.

Brand consultancy Prophet’s annual survey ranks the most relevant brands among Chinese consumers. In 2018, 30 local brands made the top 50, up from just 18 in 2016. Between 2017-18, Chinese players displaced powerful multinationals from the top 10: 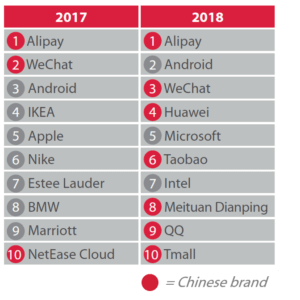 China’s retail landscape evolves at such break-neck speed that no brand is too big to fail. International players can’t expect to conquer Chinese consumers and keep them interested with a cookie-cutter approach. A highly localised strategy, based on a nuanced understanding of current market trends, is the only way forward.