Since late November, China has been stepping up restrictions on capital outflows in an effort to prop up a weakening renminbi and protect the country’s shrinking foreign exchange reserves. Among our clients – foreign companies operating in China – the main source of concern has been the ambiguity surrounding these moves.

All about china capital controls. To bring some clarity into the picture, here is a brief breakdown of China’s new capital controls, their purpose, and their implications for foreign companies.

The Financial Times and the Wall Street Journal have both reported seeing documents drafted by China’s cabinet calling for restrictions on large foreign acquisitions and overseas property investments. If implemented, the new rules would:

These measures have not been officially announced, but the government has stated its intention to crack down on “fake” transactions being used to disguise capital flight. All about Sourcing in China here.

The State Administration of Foreign Exchange (SAFE) has informed 20 foreign and domestic banks of a new “window guidance” on outbound transfers. Under the new rule, SAFE approval will be required for all outbound remittances exceeding $5m, down from a previous limit of $50m.

This measure will affect foreign companies trying to:

Companies are not only worried about the restrictions themselves, but about the ambiguity surrounding them. Requirements and process times are uncertain and, according to the EU Chamber, rules seem to differ from city to city.

“The unpublished window guidance on the control of capital outflow is disruptive to EU companies’ regular business operations,” said Joerg Wuttke, head of the EU Chamber of Commerce in Beijing, adding that several companies have reported difficulties making dividend payments that would not have been questioned one month ago.

Some foreign businesses in China are less prone to face new difficulties than others. Foreign companies that have been using an entity in Hong Kong as a conduit, for example, are likely to be less impacted.

To discuss how your business might be affected by the new regulations, and how it should adapt, get in touch with us at contact@fiducia-china.com 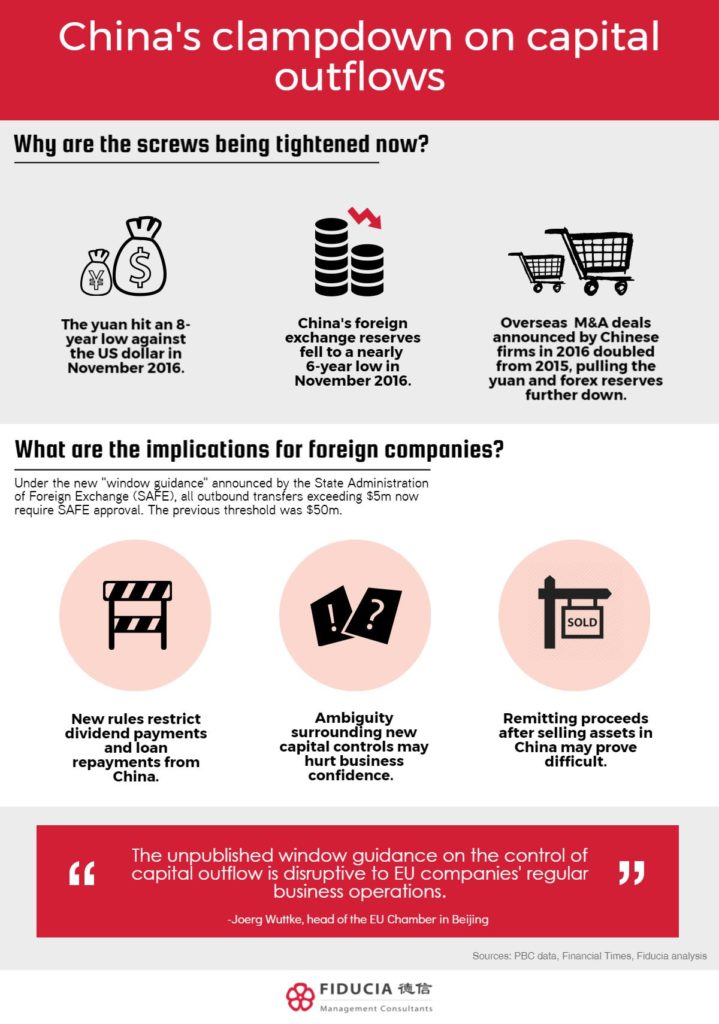