In 2019, the Chinese economy is expected to see its slowest rate of expansion in 30 years. In October 2018, the International Monetary Fund (IMF) lowered its forecast growth rate for China from 6.4% to 6.2%, citing the “negative effect of recent tariff actions”.

Will the government be able to soften this slowdown? It’s certainly trying. Beijing has started loosening its monetary and fiscal policy while allowing the yuan to weaken, and more stimulus is expected for 2019.

Here, we focus on tax-related measures set to impact international companies in 2019. There has been a lot of speculation recently around China’s upcoming tax reforms, so throughout our analysis we differentiate between upcoming tax changes that are set in stone versus those that are either false or to-be-confirmed.

China has approved cuts to personal income taxes in the hope of propping up consumption. They will take effect in January 2019 and will mostly benefit people with low and mid-range income levels. According to Deutsche Bank, the cuts could boost annual retail sales by about 1%. The table below shows how the tax burden of local employees on different salary levels will change.

As of January 2019, Chinese employees will be able to deduct certain expenses from their taxable income, an option that was previously only available to foreigners. Among foreign employees, the new IIT law has sparked numerous fears: that their global incomes would start being taxed, that they would lose eligibility for many tax-deductible benefits, and that tax  authorities will step-up their oversight of high-net-worth individuals.

The law has been ratified, but the final implementation guidelines that will ultimately clarify these fears are yet to be announced. Based on the draft guidelines released in October, this is what we expect:

In September and November 2018, China increased the tax rebate rates enjoyed by exporters in an attempt to lower their cost burden. This table summarizes the changes: 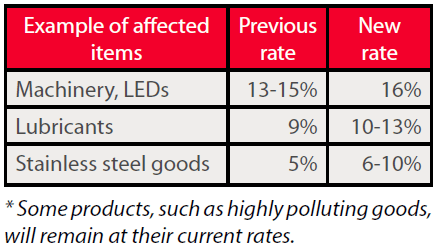 The government has also promised to cut the average handling time for export tax rebate applications from 13 working days to 10. Based on similar promises to speedup tax related paperwork, we don’t expect a significantly shorter time frame.

In October 2018, Reuters, Bloomberg, and other media outlets reported that Chinese authorities were considering to cut purchase taxes on some smaller cars from 10% to 5% to help a troubled sector. Stocks of Volkswagen, BMW, and other car makers rallied when the news came out.

But one month later, China’s National Development and Reform Commission (NDRC) dispelled the rumours. They said the slowdown “could help stimulate the workings of the market, strengthen the industry’s core competitiveness and eradicate outmoded capacity”.